This report on Equality for Lesbians and Gay Men was produced by the Irish Council for Civil Liberties in 1990, at at time when homosexuality was still criminalised in Ireland and lesbians and gays were denied full equality in society and the law: "Lesbians and gay men in this country are actively struggling for their basic human rights, both to equal respect as persons and to the opportunity to live and work as freely and openly as any other citizen, without encountering prejudicial discrimination."
The report explores the prejudice experienced by lesbians and gay men in Irish society and legislation and makes the case for equality and law reform. It also provides a model for an Equality(Anti-Discrimination) Bill.
This Report is the work of the ICCL Working Party on Lesbian and Gay Rights. In June 1988, the Annual General Meeting of the ICCL authorised the ICCL Executive to name a Working Party for the purpose of elaborating our civil liberties policy in what would also be a campaigning document. The Working Party which completed this Report included: Ursula Barry, Tom Cooney, Aideen McCabe, Chris Robson and Kieran Rose

Permission to share granted by Irish Council for Civil Liberties. Digitising these community resources in a publicly accessible digital archive can be seen as fair dealing and reasonable use of these materials (as defined in the 2000 Irish Copyright Act) and in keeping with the ethos and purpose with which they were produced. In addition to this, Permission to Use has also been granted by the owners of the collections and by the relevant community organisations. Items in this digital archive are covered by a Creative Commons Attribution Non-commercial No-Derivatives License. Please credit Orla Egan, Cork LGBT Archive and provide a link back to this site. 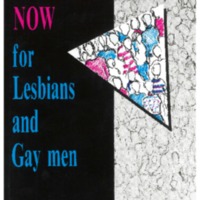 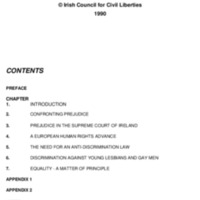