Poster for the second Irish Lesbian and Gay Film Festival, held in Cork in October 1992, as part of the Cork Film Festival.

Permission to use the photography granted by Josef Kovac. Digitising these community resources in a publicly accessible digital archive can be seen as fair dealing and reasonable use of these materials (as defined in the 2000 Irish Copyright Act) and in keeping with the ethos and purpose with which they were produced. In addition to this, Permission to Use has also been granted by the owners of the collections and by the relevant community organisations. Items in this digital archive are covered by a Creative Commons Attribution Non-commercial No-Derivatives License. Please credit Orla Egan, Cork LGBT Archive and provide a link back to this site

A3 Poster with image and text 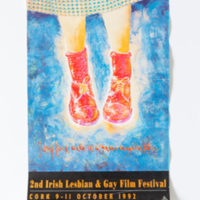