In December 1992 President Mary Robinson invited Irish lesbian and gay activists to Áras an Uachtaráin (the home of the Irish President). President Mary Robinson had been inaugurated in November 1992 so this was one of her initial public engagements. It was hugely symbolic as she was inviting the Irish lesbian and gay community into the symbolic home of the Irish people at a time when gay sex was still criminalised in Ireland.
Mary Holland wrote of the event in the Irish Times: "Not for the first time, our President, effortlessly and generously subversive of entrenched prejudice, has given a signal that cannot be ignored"
Kieran Rose was a founding member of Cork Gay Collective and an active member of GLEN (Gay and Lesbian Equality Network).

Permission to use granted by Kieran Rose. Digitising these community resources in a publicly accessible digital archive can be seen as fair dealing and reasonable use of these materials (as defined in the 2000 Irish Copyright Act) and in keeping with the ethos and purpose with which they were produced. In addition to this, Permission to Use has also been granted by the owners of the collections and by the relevant community organisations. Items in this digital archive are covered by a Creative Commons Attribution Non-commercial No-Derivatives License. Please credit Orla Egan, Cork LGBT Archive and provide a link back to this site 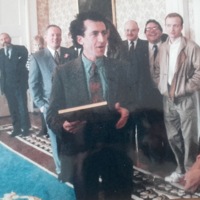