Orla Egan's article April 1992 in Munster GCN (Gay Community News) on the first ever Irish LGBT float in a Patrick's Day Parade in Ireland, in Cork in 1992. 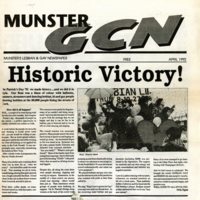