A workshop on Gays and the Trade Unions was held at the National Gay Conference in Cork in 1981. A series of motions on employment rights for lesbians and gay men were passed at the conference. 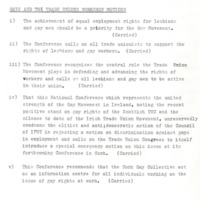