Diverse Communities :
The Evolution of Lesbian and Gay Politics in Ireland
Kieran Rose 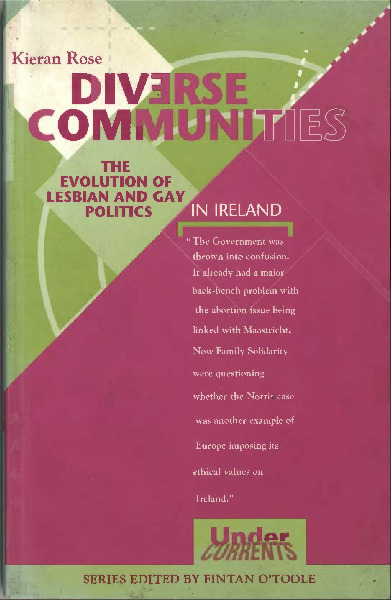 Diverse Communities :
The Evolution of Lesbian and Gay Politics in Ireland
Kieran Rose

Kieran Rose's account of the twenty year struggle for lesbian and gay rights in Ireland 1970s-1990s.
He traces the development of Irish LGBT organisations, including IGRM (Irish Gay Rights Movement) and the Lesbian and Gay Collectives. He discusses the 1st National Gay Conference in Cork in 1981, the establishment of the Quay Co-op in 1982, AIDS activism, the LGBT float in Patrick;s Day Parade in Cork in 1992 and the historic visit to Áras an Uachtarán in 1992. He traces in depth the fight for law reform in Ireland to provide protection for LGBT workers and to decriminalise homosexuality, culminating in legislation passed in June 1993.

Permission to use granted by Kieran Rose. Items in this digital archive are covered by a Creative Commons Attribution Non-commercial No-Derivatives License. Please credit Orla Egan, Cork LGBT Archive and provide a link back to this site.