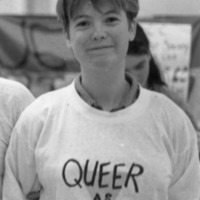 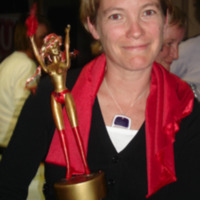 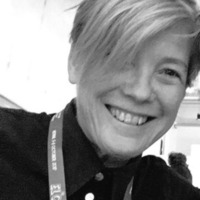 Katherine O'Donnell was born in Cork in 1966.

Katherine was actively involved with the Cork lesbian community from 1980s and could often be found in the back room of Loafers Bar, at the Cork Women's Fun Weekend, with the UCC Gay Society, at Irish Women's Camp and participating in events at L.Inc (including running a certified programme in Queer Theory and Lesbian Studies).

Katherine lived in Boston from 1988-1991. On visits home to Cork she brought back tales of how ILGO (Irish Lesbian and Gay Organisation) were banned from marching in Patrick's Day parades in New York and Boston, motivating local activists to organise the first ever LGBT float in a Patrick's Day parade in Ireland - in Cork in 1992.

With Kathleen Gaul, she was a programmer of the Irish Lesbian and Gay Film Festival in 1993.

She was involved in organising the Dyke March in Dublin and was a founding member of the Irish Queer Archive, which is now housed as a living archive by the National Library of Ireland.

Katherine publishes widely in the history of sexuality and gender and feminist social epistemology and she lectures in feminist theory in UCD School of Philosophy.

Katherine is a member of the advocacy group, Justice for Magdalenes Research and collects oral histories of witnesses from the Magdalene Laundries in Ireland.