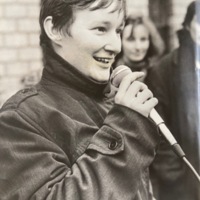 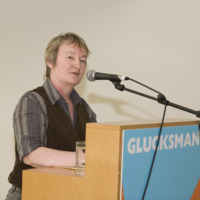 Joan McCarthy is a Kerry lesbian feminist who has lived in Cork most of her life.

Working in London in 1981, Joan joined the London Lesbian Group which held weekly meetings in Gay’s the Word Bookshop, Russell Square. She discovered lesbian and feminist authors such as Audre Lorde, Adrienne Rich, and Jill Johnston, in Sister Write bookshop and library in Islington and went on her first lesbian protest march.

Returning to Cork at the end of the summer in 1981, she joined the Cork Women’s Collective and the UCC women’s group and became involved in the development of the Quay Coop and the women’s space within it.

As a member of the Cork and Dublin Lesbian and Gay Collectives, Joan was actively involved in feminist, lesbian and gay initiatives, protests, conferences, and events throughout the 1980s.

She was a co-founder of the Cork women’s band ‘Standing Ovulation’ which played at the first Cork Women’s Fun Weekend in 1984 and the Dublin lesbian band ‘Eile’ which played in JJ Smyths, Dublin, on alternative Thursdays in the mid-1980s.

Joan was also involved in the development of women’s studies’ and lesbian studies’ offerings in UCC (University College Cork) and the Other Place LGBT Community Centre in Cork.

Joan contributed chapters on coming out and lesbian politics to the books, Out for Ourselves: The Lives of Irish Lesbians and Gay Men (Dublin Lesbian and Gay Men’s Collectives and Women’s Community Press, 1986) and Lesbian and Gay Visions of Ireland (Íde O’Carroll and Eoin Collins, London, Cassell, 1995). Joan has also published on LGBT and feminist issues in the course of her academic work in healthcare ethics.